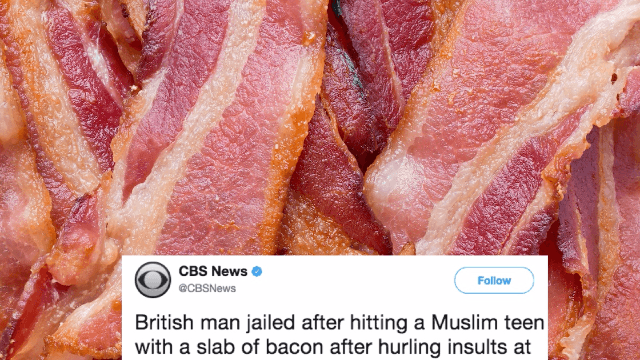 Muslim man perfectly mocks guy who attacked a teen with a piece of bacon.

Last month, a man in the UK was sentenced to six months in jail after he attacked a Muslim teen with a piece of bacon.

British man jailed after hitting a Muslim teen with a slab of bacon after hurling insults at her and her mother https://t.co/ISUX4BdQ3g pic.twitter.com/ZZHLjvB8Gz

According to CBS News, 36-year-old Alex Shivers approached the teen and her mother, hurling Islamophobic insults at them before striking the teen with a slab of bacon. (Muslims often abstain from eating pork for religious reasons.)

It's upsetting that truly idiotic acts of Islamophobia like this one take place on a daily basis, but luckily, people in the Muslim community have been able to find some levity in them.

Iyad el-Baghdadi, an Arab Spring activist and Islamic libertarian, is one of those people.