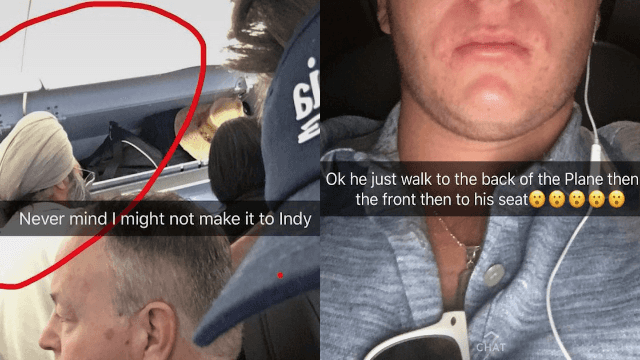 Racist teen assumes 'Muslim' man on flight is a terrorist, gets schooled by professor of religion.

Air travel is stressful for everyone, but for many Muslims in America, or people who are assumed to be Muslim based on their appearance or attire, it's a potential nightmare. And things have not gotten any better since our President-in-Chief started his reign of terror trying to ban people from our country for being Muslim. Actually, it seems like it's gotten, inconceivably, worse.

Case in point: Last week, a Sikh man in a turban was photographed on an airplane without his knowledge or consent by a teenager, whose identity has not been revealed due to his age. The teen, who decided the man was a terrorist based purely on his headwear, added a bunch of racist captions about how he "might not make it" to his destination. Etc. Vomit. Etc.