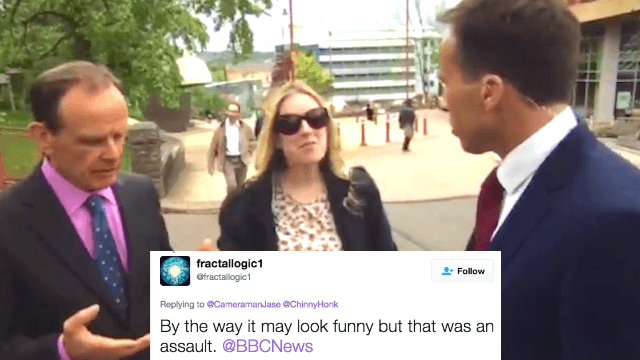 Reporter 'accidentally' grabbed a woman's boob on live TV. So she slapped him.

Things are a little chaotic in England right now as the country is in the midst of election season and we all know what that's like. But this doesn't explain this BBC news reporter reacting to a woman interrupting a live news broadcast by grabbing her by the boob.

BBC News presenter Ben Brown was interviewing BBC assistant political editor Norman Smith live on air when a blonde woman walked into the frame and gave a thumbs up to the camera. So Brown quickly tried to push her out of the frame by placing his hand directly on her right breast.

A clip of the bizarre moment is now going viral on Twitter: