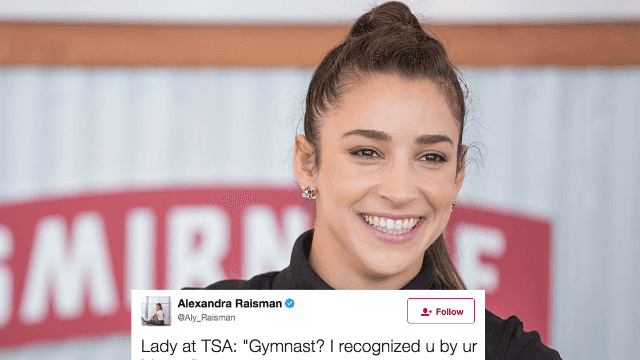 Olympic gymnast Aly Raisman claps back at 'sexist' TSA worker who body-shamed her.

Aly Raisman, an American gymnast who won gold medals in both the 2012 and 2016 Olympics, is not about to take sexism lying down. Earlier today, the 22-year-old was passing through airport security when a male TSA worker made a negative comment about her body. So she took to Twitter to call him out.

Lady at TSA: "Gymnast? I recognized u by ur biceps"
Man at TSA: "I don't see any muscles" & continues 2 stare at me
How rude & uncomfortable

Not that it should matter what she looks like or how many muscles she has (a lot), but this is Aly Raisman:

WOWWW what an honor to be featured in @si_swimsuit 2017. THANK YOU to @mj_day & the SI team for including me in this issue. I'm very proud of my body and how hard I have worked to look like this. I of course like everyone else have my days where I feel insecure and not at my best. BUT I think it is that much more important we love our bodies and support each other. It is 2017 and there is NO perfect or ideal body type. SI SWIM celebrates women for being unique and beautiful in our own way which is why I am so happy to be a part of it. THANK YOU @jamesmacari 💛

The gymnast soon followed up with more tweets to explain why this incident got under her skin: