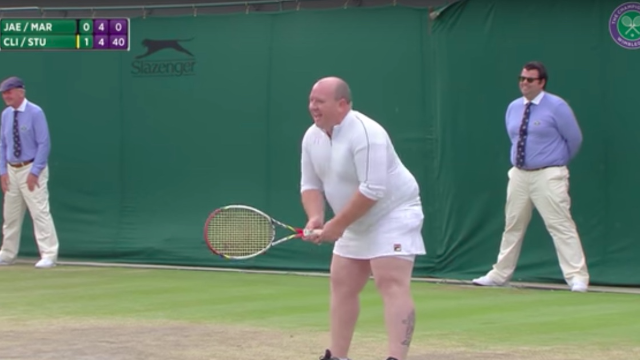 Spectators at Wimbledon were treated to quite the hilarious sight when a male fan was invited to join the ladies' invitation doubles tennis match after yelling advice to Belgian Grand-Slam champ, Kim Clijsters - but not before putting on a skirt.

According to The Huffington Post, the invitation doubles are a fairly relaxed event, and Clijsters began asking fans in the audience for advice on where she should serve the ball.

The man, who the Irish Independent later identified as Chris Quinn, the captain of a tennis club near Dublin, jokingly shouted "Body serve!" from the stands. (A body serve is when a player hits their ball into their opponent's body.)

That caught Clijsters' attention. "You said body?" she asked Quinn. Clijsters' then pointed to her opponent's spot on the court, laughed, and suggested, "Why don't you go there?" When the stadium applauded, Quinn made his way down to the court.