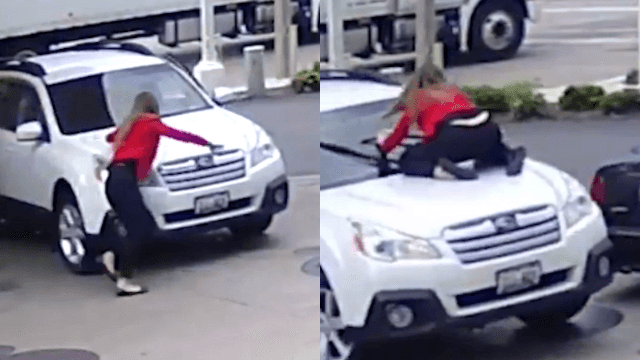 This woman stopping a car hijacker is either heroic or insane depending on your perspective.

An unknown woman in a red jacket became today's internet hero after going to extreme lengths to stop some hijackers from trying to steal her car. CNN tweeted out the "harrowing" security footage that shows the woman physically climb on top of her car to stop the hijackers from driving it away, and it might be the most badass thing we've seen since Beyoncé's last pregnancy photo.

Watch and behold the ferocity of a woman fighting for the one she loves:

Harrowing security footage shows a woman fighting off car thieves by jumping on the hood of her car https://t.co/cVdhLaGF2b pic.twitter.com/y99t4FvbkY

NOT ALL HEROES WEAR CAPES. Some wear red jackets that just look a lot like a cape.

There are, of course, a few mansplainers saying this woman should have handled the situation differently. Because apparently even human Wonder Woman faces criticism from the masses.