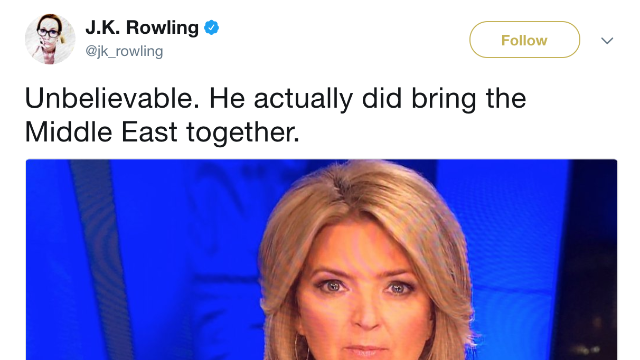 J.K. Rowling Just Dragged Trump On Twitter In The Most Hilarious Way

In the wake of Trump's off-the-rails press conference Wednesday, condemnations have been flying left and right. Turns out when you say effectively "Not all Neo-Nazi's are bad!" people get angry. Who knew?!

Among those criticizing Donald Trump were — get this — Iran and Israel. A fact that none other than J.K. Rowling decided to make comedy gold out of:

Unbelievable. He actually did bring the Middle East together. pic.twitter.com/miP9MyVLsS

The thing that makes it so great is that it's a compliment. I mean it isn't really, but Trump loves himself so much what are the odds he doesn't smell the sarcasm?

Of course, besides writing Harry Potter books and then editing them years later, trolling Donald Trump and right-wing nut sacks is probably the thing that Rowling is best at.