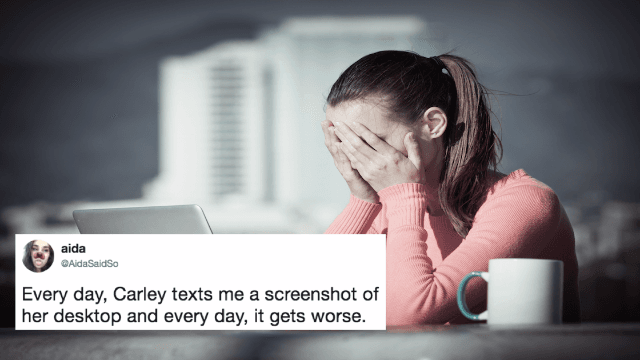 These photos of a girl's messy desktop are stressing out everyone on Twitter.

A screenshot has gone viral for a problem that will either make no sense to you, or make you want to cry at your computer.

User @aidasaidso on Twitter shared a text message conversation with her friend Carley. "Every day, Carley texts me a screenshot of her desktop and every day, it gets worse," she wrote. The photo showed three consecutive screenshots of a desktop so cluttered it's making me want to throw my own computer to the floor. It's safe to say that Carley has never heard of folders.

Every day, Carley texts me a screenshot of her desktop and every day, it gets worse. pic.twitter.com/N26KKKo06t

If the original tweet is panic inducing, at least the responses to it aren't letting Carley (or Aida, her enabler) off the hook. The original post has gotten over 400 retweets and 2,000 likes. Sometimes it's a surprise that something has gone viral, and that so many people seem to have something to say about a photo or meme. This is not one of those times.