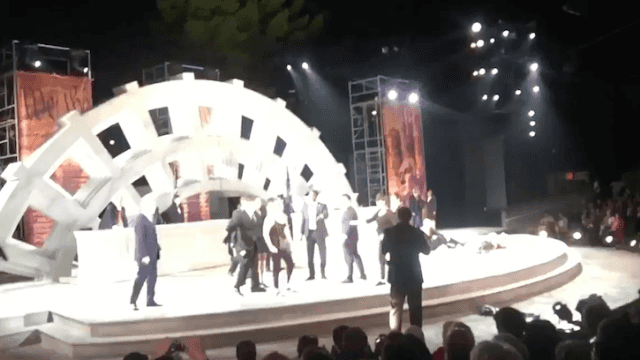 You may have heard that this summer's Shakespeare in the Park production, staged by New York's Public Theater, is Julius Caesar. If you passed either your 10th-grade English or history class, then you know the play involves the assassination of the Roman dictator. And, because Shakespeare's works are often adapted to address the current political climate, the Caesar of this play is styled to look a bit like President Donald Trump.

That doesn't sit well with Trump-supporting goons who lack any grasp of art or literature, many of whom are now openly threatening theater companies that have nothing to do with the Central Park production simply because they have "Shakespeare" in their name. But the backlash truly reached a hysterical pitch on Friday night, when two alt-right trolls interrupted the controversial show. The first, identified as Laura Loomer, got on stage to denounce "normalization of political violence against the right." Once she got hauled off the stage (on the way to getting arrested), the guy filming the outburst—Jack Posobiec—stood up and started calling everyone in the audience "Goebbels," as in the Nazi minister of propaganda during World War II.