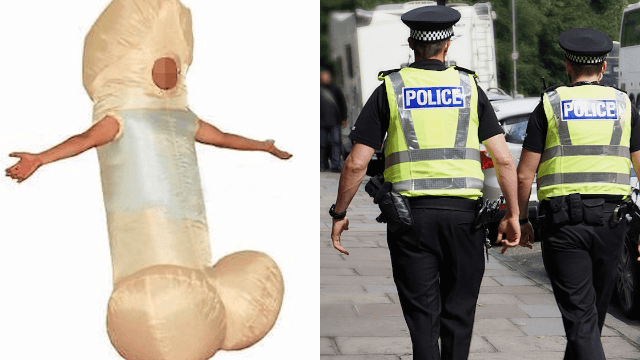 Police are looking for a man in a giant penis costume. He should not be hard to find.

If you live in or near Leeds, England, please contact authorities immediately if you have seen this man:

A group of men, including a man wearing a giant penis costume, are wanted for the "serious assault" of a 26-year-old man that occurred in Leeds center on April 3rd, according to an appeal to the public released by the West Yorkshire Police.

The victim reportedly suffered a shattered shin bone, torn ligaments and a dislocated knee after he was attacked by a group of men having a bachelor party, said police. Local Detective Constable Gaynor Burt said the victim was "very badly injured" and "will still require further surgery."

This is actually not a very funny story. Other than the giant penis costume. That part is hilarious.