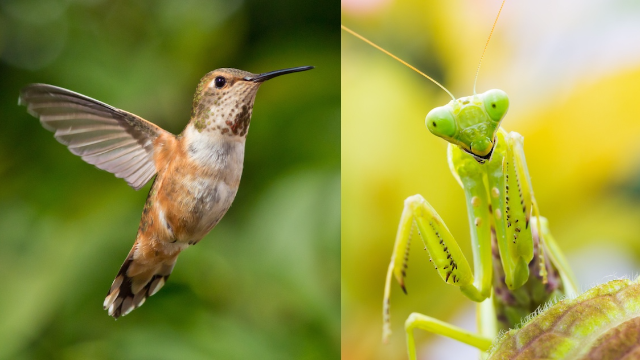 Praying mantises are apparently killing birds and eating their brains. Nature is terrifying.

Ahh nature. So beautiful. So majestic. So utterly terrifying. You remember the praying mantis right? Did you know it eats bird brains?!

Earlier this week, the University of Basel in Switzerland put out a press release titled, "Praying Mantises Hunt Down Birds Worldwide." Mantises are carnivores who mostly feed on other insects and spiders, but now scientists from Switzerland and the U.S. have discovered that they also kill and eat small birds on every continent but Antartica.

As if it wasn't terrifying enough that a praying mantis can take down a bird, wait until you hear HOW they eat them.

Newsweek interviewed two scientists to find out how exactly mantises manage to take down birds. State University of New York at Fredonia biologist William Brown explained that a mantises typically grab birds by the head, and then "pierce the skull to feed on brain tissue."