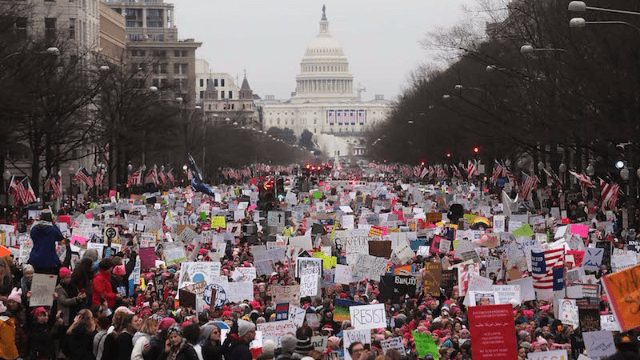 Please enjoy this glorious exchange between a protester and Trump supporter at D.C.'s march yesterday.

The numbers are still rolling in, but one thing is for sure: yesterday's Women's Marches were an incredibly moving demonstration of solidarity felt around the world. In every city, people came out dressed to express themselves with signs of hope, determination, fierce resistance and most importantly, humor. It was a beautiful cacophony of fiery protests.

Of course, there were some Trump supporters hanging around, trying to rain on everyone's parade. The Cut's Rembert Browne witnessed one exchange, between a Trump supporter and a marcher that is so good it will flood you with happiness and carry you all the way through next week. Whenever you're feeling down, remember this moment.

As a woman with a Trump scarf on climbed into the backseat of a black Suburban — her driver standing by her side, eagerly waiting for her to sit down so he could close the door — she kept lunging out the vehicle to give her commentary on the scene around her. She was clearly disgusted by the marchers surrounding her car. At one point, the woman in the Suburban said to a passerby:

“If you people had jobs, you wouldn’t be out here doing this mess.”

As this happened, another woman walked by and, without pausing to look at the Chevrolet Suburbanite, said: