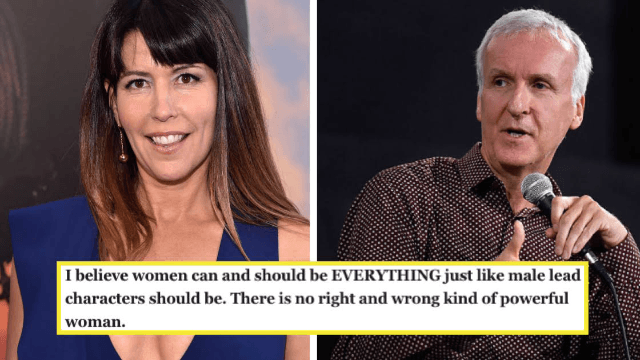 James Cameron, director of Titanic and Avatar, just got his ass handed to him by Patty Jenkins after his "criticism" of her film Wonder Woman went viral. Happy Friday!

Yesterday The Guardian published an interview with Cameron where he called the summer blockbuster Wonder Woman "misguided" and a "step backwards."

All of the self-congratulatory back-patting Hollywood’s been doing over Wonder Woman has been so misguided. She’s an objectified icon, and it’s just male Hollywood doing the same old thing! I’m not saying I didn’t like the movie but, to me, it’s a step backwards.

He went on to, ironically, pat himself on the back for writing better, stronger, female-er characters in his own movies.

Sarah Connor was not a beauty icon. She was strong, she was troubled, she was a terrible mother, and she earned the respect of the audience through pure grit. And to me, [the benefit of characters like Sarah] is so obvious. I mean, half the audience is female!