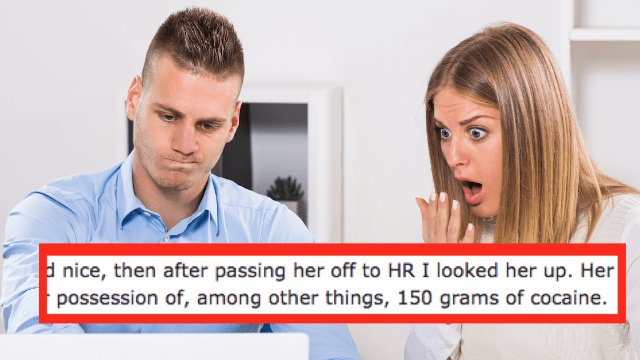 HR managers will google you. Here are 15 stories of things they found.

Sometimes, if you're interviewing for a new job, your past might come back to haunt you. Because the internet never forgets. Someone recently asked the hiring managers of Reddit: "What's your favorite 'They were perfect until we Googled them' story?"

Here are some of our favorite stories of employees whose attempts to get a job were thwarted by the internet. Also, this is a good reminder to Google someone before hiring them, or basically before interacting with anyone in any way at all:

Didn't find out until other employees complained that he had dodged a murder rap by reason of insanity & was recently deemed fit to re-join society. Apparently the case was a pretty high profile one as well. His contract was not renewed.

Had a guy apply for an enrty level post with us recently. His CV was okay, so we offered him an interview. Social media seemed okay too. He never turned up for the interview.

A couple of weeks later, there's a story about him in the local paper. Turned out that he was living at the local boarding house, and was found in the kitchen one morning totally wasted, wearing nothing but a pair of socks. When a couple of women who also lived there tried to escort him back to his room, he got violent and assaulted them. Given the dates stated in the paper, he didn't turn up because he'd been in jail at the time of the interview.

His resume has now been added to the 'do not touch with a 10ft barge pole' section in our filing cabinet.