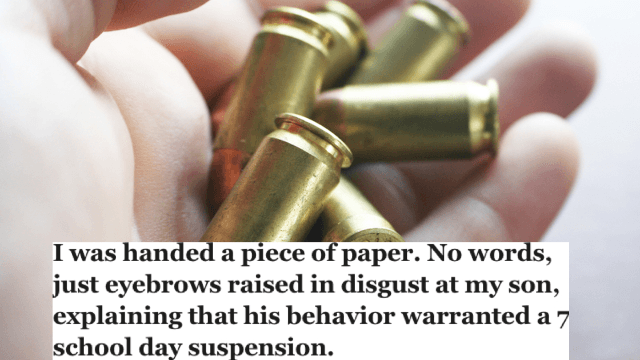 4-year-old brings bullet shell to school and mom goes viral with her reaction.

Illinois mom Kristy Jackson's 4-year-old Hunter son was suspended from his pre-school after he brought the casing of a fired bullet in, presumably to show his classmates.

According to a Facebook post Jackson uploaded on March 21st, the preschooler faces a 7-day suspension for bringing the casing to school, and could face expulsion if his "enthusiasm for guns continued." Jackson defended her son, noting that he must have picked up the bullet shell while he was spending time with his police officer grandfather over the weekend. Her post has gone viral, and has been shared over 4,500 times.

I never thought this could happen to us. You see stuff on the news like this, but....

Today, I picked up my happy little 4 yr old from preschool, at A Place to Grow, in Troy. My arrival was met with a stone faced teacher, who told me that Hunter brought a "shotgun bullet" to school.

? I was horrified. My kid? Who just spent the weekend learning gun safety?

Well....when I was escorted to the office for a sit down. I was handed a tiny .22 empty brass casing. Not a "shotgun bullet". He found it on the ground, expelled from a 22 Rifle over the weekend, while Hunter was target practicing with his Police Officer Grandpa. He was so excited, and snuck it to school to show his friends. We had no idea about it.

I was handed a piece of paper. No words, just eyebrows raised in disgust at my son, explaining that his behavior warranted a 7 school day suspension. Which I still was expected to pay tuition for, of course. And a threat that if his enthusiasm for guns continued, he'd be permanently expelled.