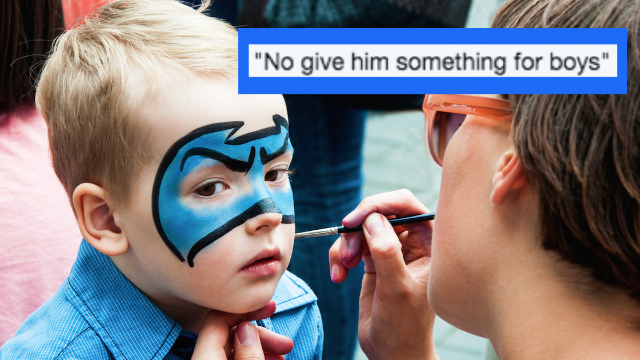 Face painter slams mom who wouldn't let her son get a butterfly on his face.

On Saturday, a clown/children's entertainer named S. S. Markarian (according to Distractify) from Los Angeles tweeted a story about the danger of gender stereotypes, and how often young boys are socialized to like violence instead of beauty. Her story, told in a series of threaded tweets, starts with a picnic where she was painting kids' faces.

Hey everyone I'm a clown and I just got back from facepainting at a picnic and here's my take on male violence in America:

It starts young. And it's more than just letting boys play with guns, it's how we shame them for feeling anything that isn't anger.

A 4yo boy asked me to paint a blue butterfly on his face. Then his mom told me "no, he doesn't want that."

A four-year-old boy asked for a blue butterfly to be painted on his face, but his mom was having no part of that, telling Markarian, "No, he doesn't want that," adding, "Give him something for boys."