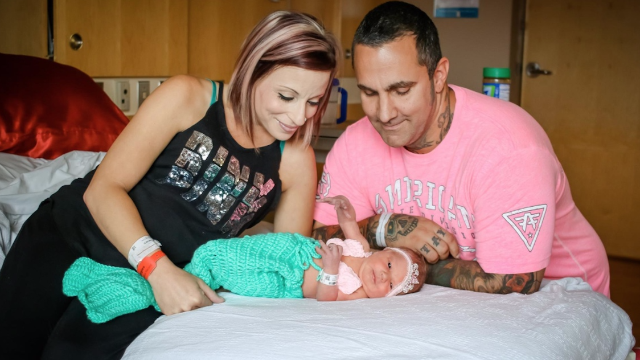 Mom uses heartbreaking story to warn other parents never to let anyone kiss your newborn.

New parents Nicole and Shane Sifrit are speaking out to warn other parents of a life-threatening disease that has their 3-week-old daughter on life support.

On July 1, the newlyweds from Iowa welcomed their baby daughter Mariana into the world. A week later, just two hours after they had gotten married, they noticed that the little girl wasn't eating and wouldn't respond when they tried to wake her up.

"It immediately went downhill from there. Within two hours she had quit breathing and all of her organs just started to fail," Shane told local news station WHO TV.

The couple left their wedding early to take Mariana to Blank Children's Hospital in Des Moines, where she was diagnosed with a life-threatening virus called Meningitis HSV1, which is caused by the same virus that creates cold sores. According to WHO TV, Mariana was then life-flighted to the University of Iowa Hospital, where she was put on life support.