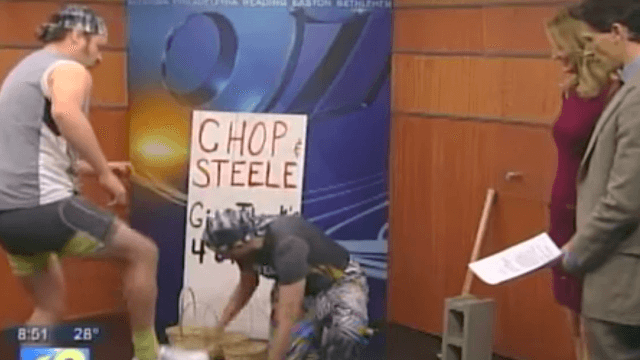 A couple of comedians named Joe Pickett and Nick Prueher managed to joke their way onto several local news shows by pretending to be a duo of "strong men" named Chop & Steele. The resulting clips are like a mixture of Kenny Powers and Anchorman, and they're hilarious.

The strong men—who don't look particularly strong—are introduced by an anchor as on their "Give Thanks 4 Strengths" tour.

While their hosts still don't get the joke, the duo immediately begins with some exercises you're more than welcome to try at home. Exercises like, um, lifting a tire up and down with your buddy. Or stomping on baskets in quick succession.

The anchors stand by and watch, and one of them lets out a "nice" in approval.